Russia to finalize plans for new aircraft carrier by 2012 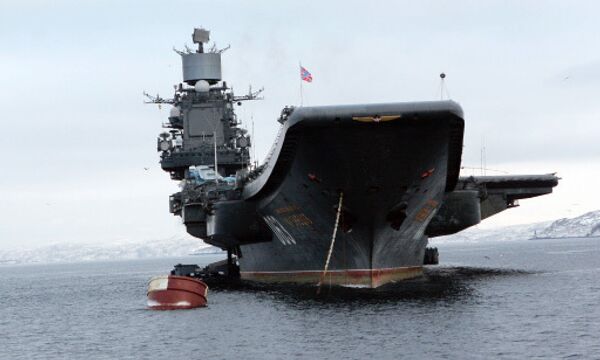 Russia will finish drafting plans for a new aircraft carrier for its Navy by 2012, a deputy defense minister for procurements said on Monday.

ISTANBUL, April 28 (RIA Novosti) - Russia will finish drafting plans for a new aircraft carrier for its Navy by 2012, a deputy defense minister for procurements said on Monday.

"We are planning to resolve all the issues in 2010-2011, and after that we will make a final decision. At this point it is necessary to determine all technical specifications of the ship and the means of achieving them. Simultaneously, we have to decide on the strategic uses of aircraft carriers in the future," Vladimir Popovkin said.

So far the Russian Navy only has one aircraft carrier, the Admiral Kuznetsov, built in 1985, with a displacement of 55,000 metric tons, a crew of 1,500, and capability to carry more than 50 aircraft.

Vice Adm. Anatoly Shlemov, the head of defense contracts at the United Shipbuilding Corporation, said in February that Russia's new-generation aircraft carrier would most likely be nuclear-powered, and have a displacement of up to 60,000 metric tons.

He added that the new carrier would serve as a seaborne platform for new-generation fixed- and rotary-winged aircraft, in particular a fifth-generation fighter set to replace the Su-33 multirole fighter aircraft currently in service, as well as unmanned aerial vehicles (UAV).

Shlemov said that unlike in the past, the new aircraft carrier would not be armed with cruise missiles, which were not part of its "job description."

He also said that at least three such carriers were to be built, for the Northern and Pacific Fleets.

Shlemov offered no timeline on the project, saying it was not as yet clear which shipyard would get the contract.

The new carrier has an estimated price tag of $4 billion.